I have a simple lambda function that is triggered from a SQS queue and I'm using the new Lambda Destinations functionality.

It is set up to trigger from QUEUE_A, do some modification of the payload body, then send it to QUEUE_B on success, or QUEUE_ERRORS on failure.

QUEUE_B and QUEUE_ERRORS are set up as Destinations on the lambda function.

When I trigger the lambda from the CLI, I get a record on QUEUE_B with a good record, and on QUEUE_ERRORS on a bad record. So, it seems to be working.

But, when the lambda is triggered from SQS, I never get a record on QUEUE_B or QUEUE_ERRORS. A good record runs the lambda, and on a bad record it goes to QUEUE_A_DEADLETTER, which I do not want.

I have tried configuring QUEUE_A to have no retry/deadletter - if I do that, on a bad record it will just retry forever (no matter how low I set the visibility/retries).

What can I try next?

EDIT:
CloudWatch shows me exactly what I expect to see - I see good logs on a "good" record, and stack traces/exceptions on "bad" records, so it is not a problem within the function itself AFAIK. 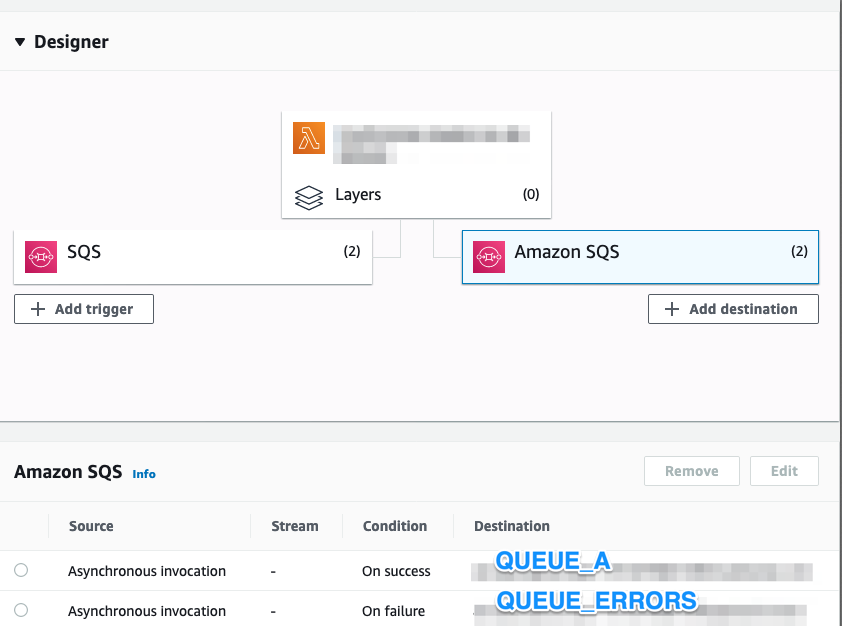 How to Choose the Best Web Hosting Provider for Your Website

How to Embed PDF Document in HTML Web Page

Submit Your Requirement (price starts from $10)